1st of November it is a bank holiday in Spain. Although nowadays there are some celebrations based on Halloween -or at least what we know about Halloween from TV and movies, like dressing up as zombies, or kids asking for trick or treat from home to home- instead, in Catalonia, it is more common to eat sweet potatoes and roasted chestnuts from street kiosks dispersed around the city and panellets, a very traditional sweet pastry with a marzipan base sold in patisseries and bakeries. 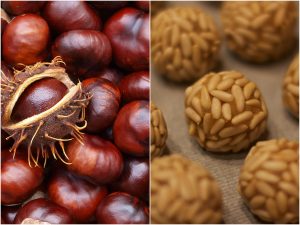 La Castanyada (The day of the Chestnut if we want to translated it) it’s a tradition celebrated between the 31st of October and the 1st of November, a period that covers the Castanyada day and the All Saints’ Day.

But, what is “la Castanyera”?

The legend says that she is an old lady who lives on the mountain, who wears a small shirt, ruffled skirt and a shoe that sounds like a “clock-clock” –according to the song with her name-. During the Castanyada day this old woman comes down from the mountain and goes to the city centre, where she sells all the castanyes that she has picked accompanied by her cat called marramiau.

And what is the name of that thing that she sells? 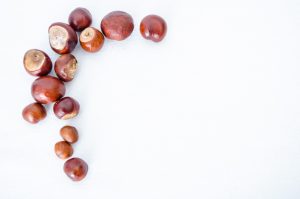 The castanyes. As some people say, the tradition of eating castanyes comes from when bell ringers used to ring the church’s bells in order to remind people to pray for their ancestors. Because of the hard work that they had to do during the night, they took with them castanyes –the most abundant fruit at that time- and a bottle of sweet wine called muscatel as a digestive to swallow them better. At the end of the XVIII century, this habit was really common for everyone, and that is why, in this time of the year, you can see lots of people eating, buying and selling castanyes on the street. But let’s move to serious things. You know that in Ca la Maria we are fans of the best meals and desserts, and that’s why our breakfasts are how they are. The panellets are a traditional sweet from Catalonia. It is made of equal parts ground almonds and sugar, shaped into balls and decorated with pine nuts, cocoa powder, candied cherries, coconut flakes or anything the ‘home chef’ likes. Nevertheless, the most popular one is still the pine nut one.